Most of the vegetables we 'put up' for the winter are straight forward in their preparations. Peas and corn are blanched, then frozen. Onions, carrots, potatoes and shallots are stored in the basement. Tomatoes are canned whole or pureed. Eggplant however, has always been savored as a purely fresh summer delicacy. We had tried freezing, pickling, but nothing we tried seemed to be worth the effort. That is, until we discovered a fabulous way to freeze breaded and cooked eggplant slices. They are crunchy and creamy, and make the best eggplant parmesan you can imagine. Here's the recipe, adapted from Cook's Illustrated. 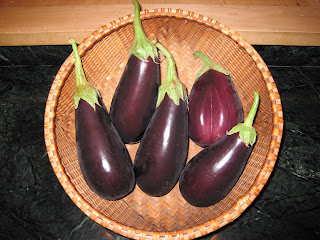 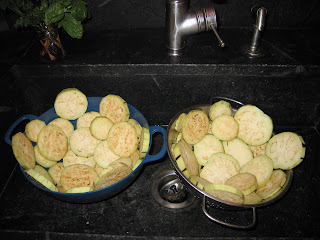 Arrange eggplant slices on a triple layer of paper towels, cover with more paper towels. Press each slice to remove as much liquid as possible.
2. While eggplant is draining, adjust oven racks to upper and lower middle positions, place a rimmed baking sheet on each rack and heat oven to 425º.
3. Put Panko bread crumbs in a pie plate and stir in 1 cup cheese, 1/4 teaspoon salt, and 1/2 teaspoon pepper, set aside.
Combine flour and 1/4 teaspoon pepper, and 1/2 teaspoon salt in a large zipper-lock bag, shake to combine
Beat eggs in a second pie plate. 4. Place 8 to 10 eggplant slices in bag with flour, and shake to coat eggplant 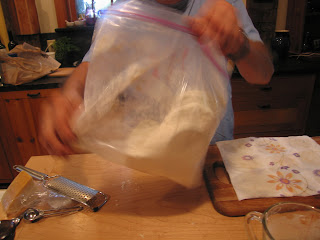 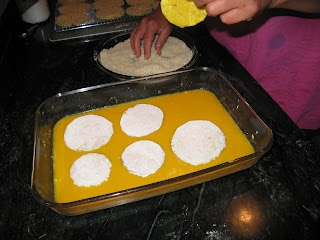 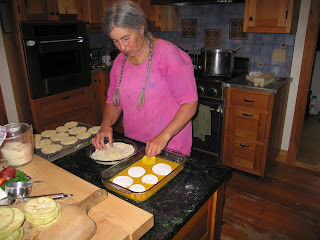 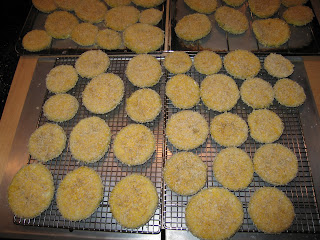 5. Carefully remove preheated baking sheets from oven. Put 3 tablespoons oil on each sheet, tilting to coat pan evenly. Place half breaded eggplant on each sheet in a single layer, bake until eggplant is well browned and crisp, about 30 minutes, switching and rotating sheets after 10 minutes and flipping eggplant slices with spatula after 20 minutes. 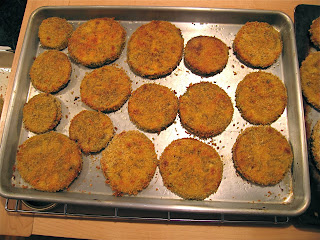 6. Let cool on wire racks. Put in a zip lock freezer bag.. don't forget to write the date on the bag!. In the dark days of winter take out as many slices as you'd like, layer with tomato sauce and cheese, and bake until bubbly.

Ellen Gibson, Stearns Hill Farm, West Paris, Maine said…
What a privelege to read your blog. I love the recipes and especially the photos that accompany the recipes. Your farm sounds beautiful. I farm, too, and need to be reminded sometimes of the steady rotation of the seasons, the things we can rely upon, and beauty of the earth and its creatures and be grateful.
November 16, 2011 at 10:57 AM