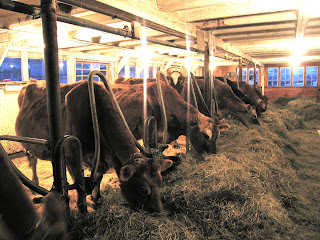 Ah, nothing like a barn full of happy cows. We were able to find 100 bales of wonderful hay from 2007. The opened bales are full of pink clover blossoms, purple vetch, yellow birdsfoot trefoil and green sweet smelling grasses. Its rather comical... the cows are fed their regular hay from 2008 and they just stand there. Then, out comes the "new "hay, their eyes light up, and they dig right into it. That's all it takes... a little topdressing, a whiff of the good stuff, and they are in bovine heaven. 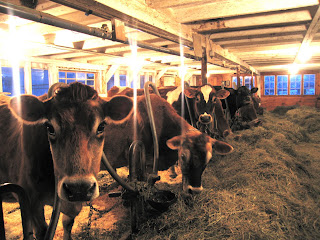 Cows really like having their pictures taken. Here's Timothy, Hershey, and Boffo.
We are almost half way through our milking and cheesemaking season. By mid April the cows are living outside, coming inside only to be milked. Then, in May they are " dried off", and spend the summer grazing , chewing their cud, and generally enjoying life. It fantastic for them and for us. We don't have to be in a hot barn in the summer, and they only have to loll around. It wasn't always like this. When we started milking cows in 1981 we milked year round. Day in and day out. Slowly our heard numbers increased until we were milking 30 cows and had almost 50 head. In 1995 we questioned how much longer we could keep this pace up. We were milking, making cheese, and growing a 4 acre summer market . We found a wonderful farm for our cows, sold most of them and kept just 4. Now we milk from November til the end of May. We still have the garden, though it is a bit smaller. We milk 7 cows : Wizard, Timothy, Hershey, Boffo, YooHoo, Bosco and Moxie.
Its still a lot of work, but milking only 1/2 the year makes it all so much more manageable.