This winter I am taking part in a 'farmer to school correspondence program'. 4 times during the winter months I write to a school and tell the kids what's going on here at the farm. This year I am working with the Red Cedar School, in nearby Bristol. For my January letter I wrote about cheesemaking. I know I already posted this, but some how some of came through with code in it, so I'm re posting.

In my December letter to you I promised my next letter would talk about winter on the farm, and how we make cheese.

During the summer time, most of our days are spent out of doors working in the garden. The cows are not being milked, and so are 'out to pasture'. Grazing, lolling around, and never seeing the inside of the barn.

Winter, however, is the flip side of summer. The cows live in the barn. They go outside for exercise just about every day, but night will find them all cozy in the barn. In the summer they graze for their food, in the winter, we bring hay to them.

Our days are spent milking the cows, taking care of them, and making cheese. Great care is taken to make sure we make the best tasting milk we can, because if the milk doesn't taste good, neither will the cheese. So, the hay we feed them is green, and full of clover and different grasses ( did you know that what a cow eats and even smells goes right into the taste of the milk?). They are milked twice a day, in the morning and evening. 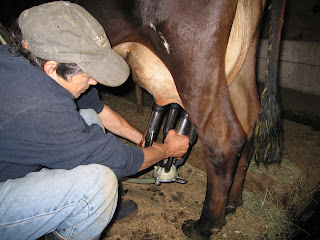 After milking, the warm milk is stored in a 'bulk tank' where the milk is cooled, and stored until it's time to make cheese 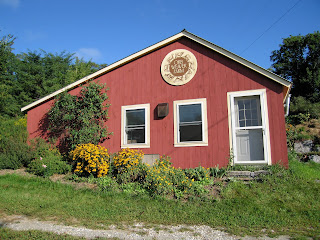 Cheese is made every Monday and Thursday. On cheese day we pump the milk from the barn to the vat in the cheese house. 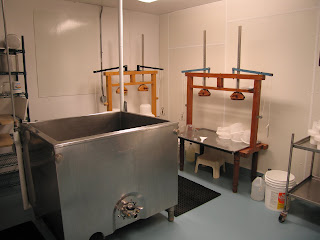 There the milk is warmed to 90º, and a special cheese culture is added. This culture helps to acidify milk. Next, rennet is added to change the milk from a liquid to a firm mass, called 'curd'. I can tell when the curd has formed by testing it. 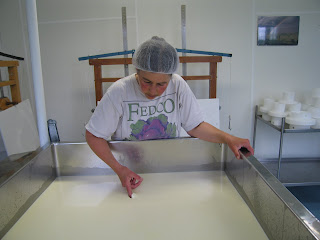 Then, the cheese is cut into small pieces with special curd knives. 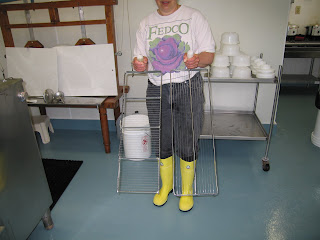 The reason we cut the curds is because milk is 85% water, and we want to get as much of the water out as possible leaving us with a product that is mostly protein.

Here is a picture of me cutting the curd. 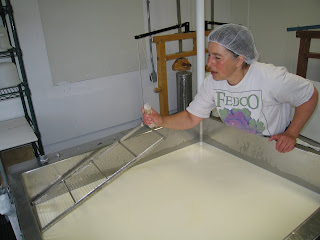 After the curds are cut, we have curds ( the solid part) and whey (the liquid). 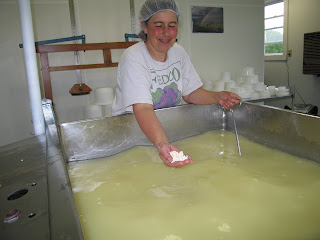 The curds and whey are stirred for about an hour while the temperature slowly rises.

The whey is then drained, and we stir the curds by hand, getting out as much whey as possible. 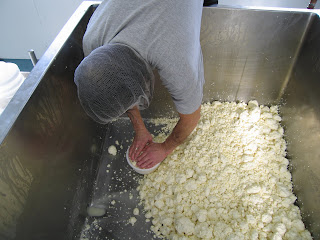 And then, the curds are put into molds. 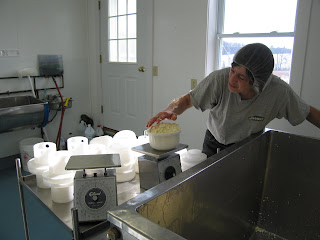 The cheeses are weighed so that they are all the same size.

They spend the night in the press, where even more whey is removed. 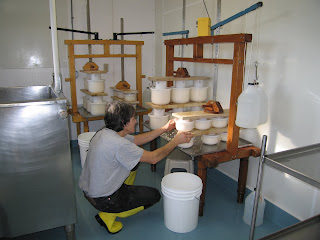 The next day they are taken out of the molds and put in the cooler.

After a week of being turned daily, they are waxed. 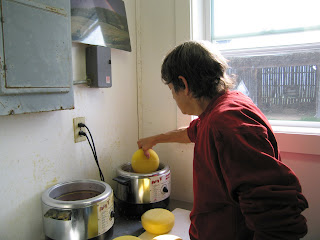 And then go back to the cooler, where they age for about 8 months. 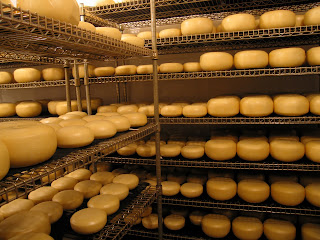 Then, its off to market with them !!

So, that is our winter life in a nutshell. Please don't hesitate to ask me any questions you can think of, whether it be about the cows, the cheese, or anything else!

Anonymous said…
So when we buy cheese curds it is part of the unfinished cheese product?
February 21, 2010 at 2:40 PM

Marjorie Susman said…
Sort of. When we leave cheese curds for folks who buy raw milk here, it is left over from our cheesemaking day.Those curds could have been further pressed into a formed cheese, but we filled all our moulds so it is extra. BUT, some people "just" make curds to sell as curds. And for them, it is their finished product.
Thanks for the question!
February 26, 2010 at 9:16 AM