One of the reasons I never resort to buying tomatoes out of season is that we put up tomatoes so many different ways that I only crave fresh tomatoes straight from the garden and never from the store First we take care of the canned whole tomatoes, putting up around 50 quarts, since they are the most versatile. Then, after they are done, we move on to purees for sauces and soups. And then it's on to dried tomatoes for tapenades, stews, and eating out of hand. The only things left will be salsa, and that will happen later this week, and freezing quarts of fresh tomato sauce with lots of fresh basil, parsley and garlic for pizza, which will happen just before the frost.
To make puree, we have a wonderful gadget called a ' Roma Sauce Strainer'. Tomatoes are put through a hopper, a handle is turned that turns an auger, and the puree flows into a pot, the seeds and skin into a separate bowl for composting. 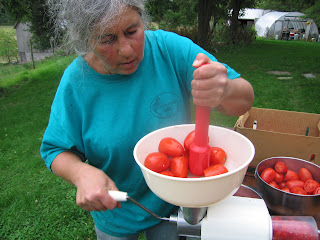 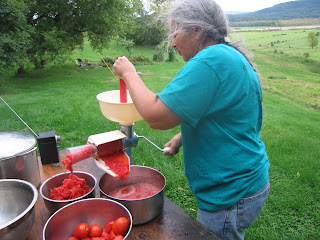 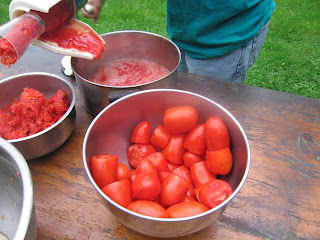 The puree is boiled for a few hours till it thickens a bit, then ladled into hot sterilized jars and processed in a boiling water bath for 45 minutes. 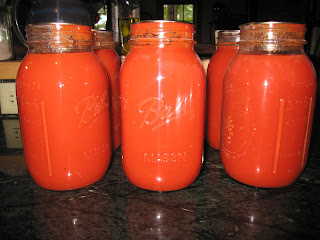 Drying tomatoes is done in a food dehydrator. The tomates are cut into thick pieces, sprinkled with salt 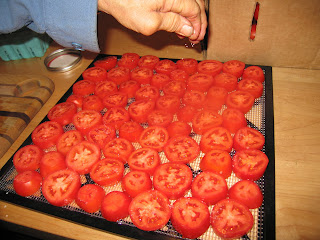 and put into the dehydrator for around 24 hours. 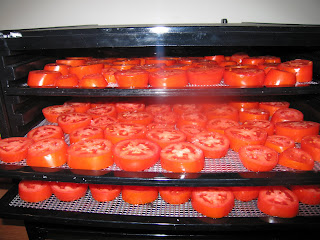 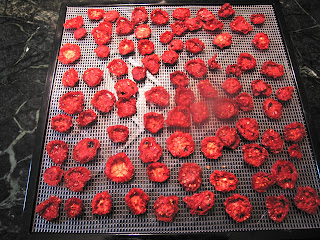 While they are drying the house is filled with the wonderful warm aroma of tomatoes. 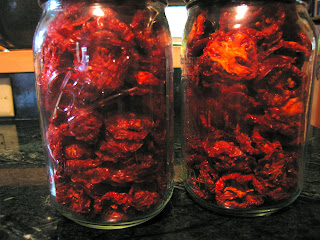 Having the larder filled with all the different type of preserved tomatoes is more than just an incredible feeling of food security, it's the culmination of a summer well spent. A year that started in March with the seeding of tomatoes in the greenhouse when the cold wind whipped around, planting them out of doors in the long days of May, rejoicing with the first cherry tomato in July, and the few short summer months to relish the full sized tomatoes warm from the vine. And now, we can look forward to a winter of glorious dining!