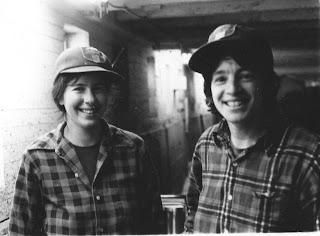 Marjorie & Marian 1980
Marian & I met in 1976. How is that two city kids had the audacity to imagine a life as farmers?But we did, and we set out to learn all we could about gardening, preserving food,
and all things bovine. I worked on a small dairy near where we lived in Western Mass., and then took a 2 year dairy science program at the Stockbridge School Of Agriculture. We knew nothing about cows. Didn't know what they ate, how they were cared for, how they were milked, if they bit... literally nothing. But I settled right into the dairy life. The rhythm of the dairy is a lot like a cow chewing her cud. It's slow, contented, and methodical, it's repetition soothing. Even the magic of making cheese can not be hurried.
So it was that we found ourselves in 1980 managing a large herd of cows in north central Vermont. It wasn't a good fit. We were in way over our heads, and knew it from day one. However, we did amass a raft of knowledge. We were like sponges, so eager to learn...cow care, and feeding, and milking, and learning to back up a tractor with a 2 wheel manure spreader hitched to it.
It was on Valentine's day, 1981 that we went for a job interview at Mad Maggie Farm, the farm that would become Orb Weaver Farm. Although it was mid February, it had been quite warm and the low fields to the east had a green blush to them. We were hired. I to milk the cows on their main farm some 5 miles away, and Marian to take care of the heifers in the barn here. The job included the rather ramshackled farmhouse, and the use of some hay land to the north of the house to develop our market gardens.
A Valentine's day doesn't pass by with out a soulful toast to the years gone by. And here we are, 30 years of toasting a special day in the same place! 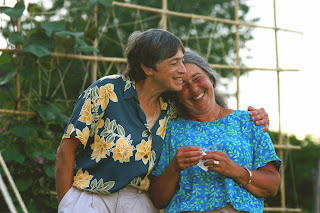 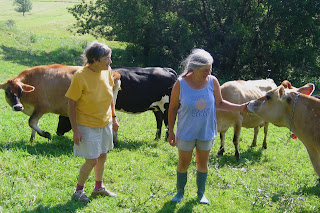 Anonymous said…
That picture brought tears to my eyes. Mike and I will drink a toast to you tonight. Eileen
February 13, 2011 at 6:17 PM

cathunter said…
I have no idea why I am called Towanda on these things...but the right e-mail for updates is cathunter101@gmail.com THANKS for posting. xox Cath
February 28, 2011 at 6:19 PM